The Relationship Between Social Comparison Theory, Modeling Theory, Eating Disorders & Mediated Content:
A Closer Look at Cosmo's Advice to Women & the Thinspiration Movement
What is thinspiration?


It's the words of those who believe thin is perfect, and thus inspire others toward eating disorders:

"3 more lbs and I win."
"Relax and let ANA take control."
"Everyone is controlled by food, but only a few can control it."
"Thin is worth dying for."
"I want to be more than anything, even food."
"Feather weight perfection."
"Just juice for me."
"It's not deprivation, it's liberation."
"I can control my life, and my death."
"ANA: A love/hate relationship."
"No thanks, I'm not hungry."
"The pain will pass."
"Not perfect yet."
"Starvation is sacred."
"I don't want to be saved."
"Perfection is not attained when there is nothing left to add, but when there is nothing left to take away."
"Nothing tastes as good as thin feels."
"I had a hole in my heart, so I threw away my plate because nothing filled me up, no matter what I ate."
"Say no to food, and yes to thin."

Those pro-ANA words came directly from the maker of the video. She seemed inspired by the actress Mary Kate's eating disorder and obviously models her own anorexic behavior after Mary Kate's. This immediately shows a correlation between mediated thin role models and new cases of anorexia and bulimia in American women. Below is the image of a real girl's weight loss, as published on a thinspiration pictures blog.

Here's the question: Why do women feel as though they need to be thinner? Where do the unrealistic expectations of thin-perfection come from? Take the infamous monthly magazine Cosmopolitan, which has millions of readers. Here is a sample cover: 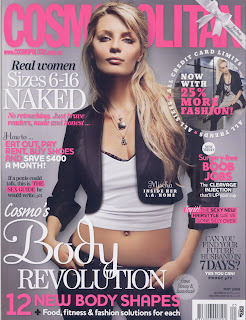 Not only is an unrealistically thin girl (look at the size of her right wrist!) displayed in a positive light, but big, bold words claim importance on the page: "BODY." Go on to read the rest, and you'll see that this article is about body solutions. As you'll come to find in the following article analyzes, Cosmo's content focuses on advice for changing your body (dieting) and changing your sex life. Many times they combine both, suggesting that to be sexually successful, your body must fit into certain standards.

The surprising secret to sexy skin
An article about skin care seems innocent enough, despite the fact that it probably doesn't add a positive message about body image; girls must have perfect skin, it says. But, we all know there are more important things most girls should be worried about.

So what's surprising about this secret? It says it in the first sentence: "You know that many factors can affect your skin: the weather, your menstrual cycle, your cleansing routine, the Pill, and yes, your diet." Immediately the lead places an emphasis on the last option (your diet) by off-setting it with two commas and the phrase "and yes." Girls who read this will immediately think, "Oh, so dieting not only gets me thinner, it also makes my skin clearer! All the more reason to starve myself." My analysis of this emphasis on the word "diet" is clearly correct; Cosmo also published a whole article connecting perfect skin to dieting: A Diet for Gorgeous Skin.

But, that isn't all this article contains. Check the second sentence: "But there's one factor you don't hear much about: your ethnic background." Suddenly, Cosmo has thrown a monkey wrench into the spinning gears of these girls' minds. "Oh," they think. "Now there's something I can't control. Because I'm [insert ethnicity here], I have to place even more control on dieting." Thus, their self-esteem is permanently damaged, knowing that because of their skin color, they'll get more pimples.

It sounds ridiculous, because yes, it is ridiculous. But the main reason women, especially younger girls, develop eating disorders is to feel as if they're in complete control of their weight. To suggest that they have no control over something, is to send them into a panic and search for anything they can control. It's quite a dangerous thing to do to a vulnerable girl's self-esteem and mind.

Drop 5 Pounds in a Week
Yes, this is a Cosmo article dedicated entirely to losing weight. And, worse, it's dedicated to losing weight quickly (in a week), suggesting to women that the only way to become thin is quick and easy. This kind of attitude can frustrate those who try healthier ways of losing, and inspire them to become anorexic or bulimic.


Here is the first sentence: "You want to shed weight for an upcom­ing event. Do you (a) accept how you look and detag Face­book pics later, (b) stop eating, or (c) follow our simple plan?" Cosmo just planted a seed, however small, of suggestion in the reader's mind. They ask "Do you stop eating?" nonchalantly, as if that's as normal of an option as detagging pictures on Facebook. This desensitization to blatantly and dangerously unhealthy risky behavior on the part of the author is sure to lead to the desensitization of the reader. "Hm," girls think. "I could follow Cosmo's Step B." (My analysis of this sentence is mirrored in a second article's lead: "You won't have to starve yourself within an inch of your life to do [this diet.]")
What's worse than that? Well, as soon as you begin to read the article, it mostly sounds like another diet fad. Cut pasta, drink a lot of water, etc. According to the manager of UNF's Fitness Center, Jim Baur, it's actually healthier to, rather than cut pasta altogether, eat it after you workout to help quickly re-energize your body. He says that's it's unhealthy to cut any food group completely from your diet, because there's a reason the food pyramid contains all of them. But do you see Cosmo telling girls to eat? No way, Cosmo likes to tell girls to burn more calories by having sex on top of a guy. Translation: You should adopt the "thinspiration" mindset because guys will have sex with girls who do.
Why is my boyfriend sabotaging my diet? AKA: He's supposed to want me to be thin. Why doesn't he care that I want to lose weight for him? Cosmo gets an ounce of common sense when it says, "He also may think you look fine just the way you are and not understand why you want to slim down." Instead of continuing on that path, reinforcing that positive remark, Cosmo veers off in a completely different direction. It tells the girl to stand up for her right to diet (ie: and what, in some cases, is her right to starve herself) and be her own cook, even suggesting that if he can't take this, he's "not supportive."
Girls should have boyfriends that support their health and their self-esteem. I think I would break up with my boyfriend if he highly supported any diet I decided to do. It's basically saying, "Yes, I love that you're trying to look just like the models. You're not good enough or attractive enough now, and your looks are all that's really going to keep me here anyway." There's not enough emphasis on the truly attractive characteristics girls should be focusing on: their personality, sense of humor, intelligence, creativity and more. By failing to recognize this, Cosmo reinforces these negative emphases.
My personal favorite Cosmo article: Why Dieting is Bad for Your Boobs Cosmo says, "You're not thin enough. Maybe you should diet OR starve yourself." But wait! "Make sure you're constantly dieting, because if you slip and eat one wrong thing, your boobs will sag." This freaks girls out even more. They think, "If I reach my ideal weight and then go back to my normal routine, my boobs might become ugly. I should never stop dieting." It reinforces the belief that physical characteristics are all that matter, and sends a dangerous message that to balance all "beautiful" aspects of your body, you must focus on doing exactly the correct things to your body. If you fluctuate (like most normal girls do) and lose control at all, your efforts will have been for nothing. That makes girls want to be even more in control, and probably pushes dieting over the edge of anorexia.

I would suggest that women follow Cosmo's advice to a dangerous degree, catching onto its starvation hints and idolizing its cover girls, comparing their healthy, average bodies to unrealistic body ideals. This equates to a culture of American women who don't feel attractive enough and thus feel they must model the behavior and bodies of others. We have become a thin-inspired nation. This is dangerous and flat out incorrect thinking. Thin is not perfection--as the thinspiration video and Cosmo magazine seem to suggest; being content and happy with who you are on the inside and out is perfection. Until our widely distributed magazines and other media outlets follow this rationale, women all over America will continue to develop eating disorders, and many of them will eventually die from them.
Posted by Rebecca McKinnon at 3:38 PM No comments:

Rebecca McKinnon
I am a senior at the University of North Florida, majoring in English with a minor in Mass Communication.

Which media outlet affects your self-esteem the most?